DONE!! This morning Imre an Peter Kabai, father and son from the San Francisco Bay Area finished their trip. If you are new to their adventure you can check out this informational video. Of course their final day was, like much of their trip, not without its difficulties.

They started at an early 1am in order to take full advantage of the better weather conditions that this time offers. By 8 am they had reached Emmonak where they paid a native to retrieve them from the Bering Sea once they had arrived there around noon. They continued on and moved quickly, filled with the excitement of their nearing destination. But they were also saddened by the sight of multiple beluga whale corpses on the shore that had been hunted and harvested by the native fishermen.

Upon reaching the sea they had a large celebration drinking some unicum and firing off some shots over the sea. They packed up the canoe and awaited the motorboat that would take them back to Emmonak. Unfortunately the men whom they had already paid did not show up as planned at noon which caused Imre and Peter to worry. It would be very difficult to canoe back up the yukon river to Emmonak, especially in poor tidal conditions. The men finally showed up two hours late and brought them back to the village. 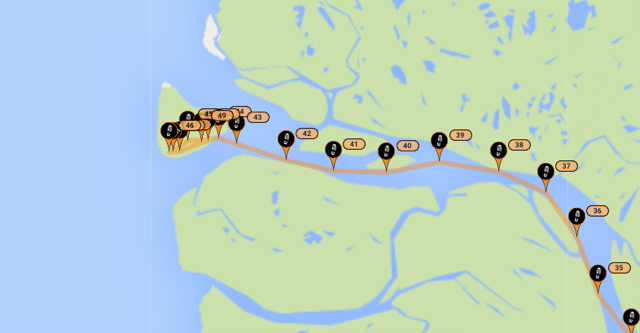 Here, our adventurers looked up a kind gentleman they had been referred to by a friend of Imre’s. They were provided with food, lodging, and an ATV to be able to reach a shower and laundromat. We are very grateful for his kindhearted help. He drove them to the nearby airport so they could make arrangements for their return flight. They will be flying out tomorrow and will arrive home on Thursday or Friday.

Reflecting on the completion of their adventure, Imre said, “Every day of this trip, we pushed ourselves past our boundaries and like this we were just able to finish it. It is something we will remember forever.”